“MY OWN INTEREST in imaginal realms began with a series of confounding invasions of daimonic imagery into my everyday life.  Some months after the birth of my daughter, just prior to my 40th birthday, startling episodes of spontaneous non-ordinary states of consciousness began to intrude upon my comfortable orientation to reality.  Repulsive, sometimes horrifying images burst into my mind at odd hours of the day and night. Vivid scenes erupted from nowhere complete with dismembered bodies, excrement, and violent sexual assaults by wolfmen and other strange, half-human creatures.

In a flash, my inner life would shift from the ordinary landscape of the ‘wash the dishes’ patter of relived events of the day, the chatting with the dog or planning for tomorrow, to one teeming with images of  harrowing mythological creatures, axe murderers, tarantulas, rapists, rats, maggots, and snakes in surreal settings—like a Salvador Dali painting.  Was I losing my mind?  Had I tapped into a sadomasochistic shadow self? Was a demon force invading me?  Was I having a flashbacks to childhood or was this a nightmare hallucination breaking into my daylight world? Needless to say, I was deeply disturbed by the insistent reality of these images over which I seemed to have no control.” 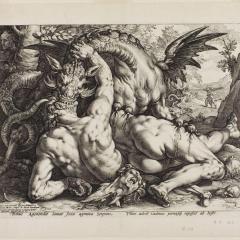 “RADICAL ENCOUNTERS WITH THE DAIMONS stimulate taboos, those sacred unknowables that combine fear and loathing with fateful attractiveness. Since these energies require instinctual, bodily, receptivity for their assimilation, they especially activate taboos associated with sensation, feeling, and instinct. The daimons activate the full range of feelings such as  aggression, rage, fear, sexuality, repulsion, sensuality, power, and sadness, and bring to awareness what has been previously repressed or denied.  In theory, both the mental (verbal and visual) and instinctual (feeling, sensation) aspects of the image should command equal attention as it emerges into awareness, but our longstanding cultural hostility toward the instincts mitigates strongly against acceptance of body energies. Thus, we find innumerable reports of fantastical mythic images in Jungian-related texts especially. But these can leave one longing for the juiciness of their passionate underpinnings.”