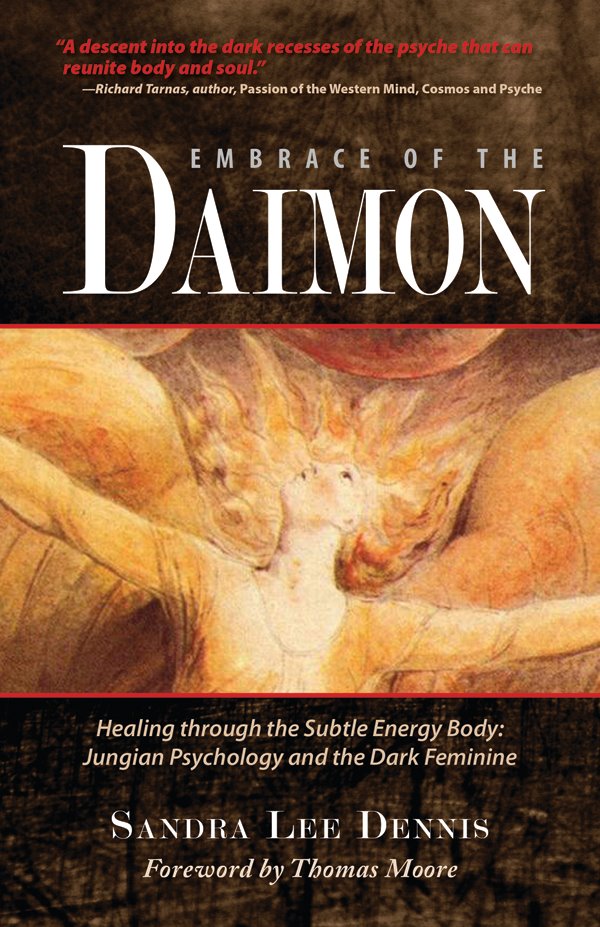 Embrace of the Daimon by Sandra Lee Dennis has been revised since it was first published in 2001. A lot has happened in the past decade that made the author’s decision to do this revision. The news is rampant with sex scandals. The media is bringing more violence and sexuality into our day-to-day lives. This includes what we see in video games, in the news, in books, movies and television. It is everywhere. If we don’t learn to embrace the darker aspects of ourselves then we miss out on an opportunity to attain a higher level of awareness. By gaining an acceptance of the aspects of ourselves that frighten us, we can learn to grow and attain a higher level of consciousness. By repressing and avoiding dealing with the dark archetype we actually give it more power and in doing so we become weaker. This is when it can seem to transform itself from daimonic to demonic.

Daimons are described as “messengers of the gods” who would connect heaven and earth by exchanging messages between the human and divine realms. When Dr. Dennis started doing work with them through imaginal visitations, she found that they deepened her connection to life. Initially, however, she found the images that she was seeing to be horrifying. But she also discovered that they revealed information to her from our collective psyche because many of them seemed to be coming from our ancestral or collective history. Delving deeper into Jungian based psychology, she found that these connections bring sense to what we are experiencing.

Through writing this book, Dr. Dennis shares a tremendous amount of personal information about her self and the dark visions that she was seeing so that we can gain a better understanding of her experiences and the value in applying this information to our own lives. I found her willingness to share these dark visions to be helpful because they made me realize I am not alone in having this experience. If she didn’t go into such depth, I might not have been sure that her visions were as dark as some of mine have been. She also does a great job of analyzing what she has experienced. By bringing these thoughts to light, and analyzing them it reduces the impact of the darkness surrounding them.

While Dr. Dennis discusses the ways in which we can embrace the “Daimon,” I personally would not be comfortable in embarking on this journey without professional help. Her book has helped me to understand the importance and the path to leading myself to wholeness, yet I also realize that I would not do well in embarking on this adventure on my own. I think that it is incredibly important that “Embrace of the Daimon” is read, especially by mental health professionals, so that we can learn how to use this aspect of ourselves to heal and grow.

I also found it interesting that the title, Embrace of the Daimon, was unsettling to me. If it was a romance novel, I wouldn’t have had a problem with it. Yet I think this is the point that the author, Sandra Lee Dennis, is trying to make. If I feel it is okay to immerse myself into a darkly erotic novel, I don’t feel disturbed. Yet, to read a non-fiction book that is written about embracing the darker aspects of myself, I feel some discomfort. It is kind of funny because it is these aspects of myself that I feel draw me into enjoying fiction in which characters have actually embraced their daimons!

Spirituality Today Review of
“Embrace of the Daimon”

“This book is a remarkable achievement—one borne from the ashes of personal transformational experience.”

“Embrace of the Daimon” is a deeply fascinating publication—one which most impressively features some excellent commentary on C. G Jung’s psycho-spiritual interpretation of the medieval practice of alchemy.

In particular these relate to the alchemical concepts of ‘coniunctio’, the union experience and ‘nigredo’ or the dissolution process and how they relate to the emergence of the Daimon spirit.

Dennis believes that as the daimonic forces rises within us all so emerges the challenge of letting go of any old sense of ‘I’ that we have invariably based our personas on throughout our lifetime.

This might be a relatively simple process in its proposition but a deep challenge in practice.

Thankfully, and throughout her book, Dennis offers her own experiences gained from this inner transformative process. As she so descriptively explains, the path is indeed dark and foreboding for the uninitiated. However, as a reader I found the way that she generously shares her own dark and transformative experiences will be of great help to others who may wish to follow her lead in confronting, rather than simply suppressing, the dark material that occasionally rises within us.

This book is a remarkable achievement—one borne from the ashes of personal transformational experience. It will delight and educate those who feel that our current evaluation of the spiritual process fails to address so many important and key components that ordinarily reside undetected within the human psyche.

If all of society took the same approach in integrating our personal shadows rather than projecting them outwards we might not be facing the Four Horsemen scenario that we currently are.

“Embrace of the Daimon” is a dark, brooding and challenging read but one that magnetically draws into the light important issues related to the psycho-spiritual malaise that mankind has slipped in to. In her book, Sandra Lee Dennis offers us all an opportunity to embrace our own daimonic powers and as a consequence release into the world a new sense of life, as well as a vibrant, creative vision of what it means to be human.

“In this unique, engaging work, Sandra Dennis goes beyond the split that continues to underlie the phrase ‘mind-body’.”

We speak more urgently today of a mind-body connection as psyche truly seeks to incarnate in and through us beyond anything we might say or interpret about her. In this unique, engaging work, Sandra Dennis goes beyond the split that continues to underlie the phrase ‘mind-body’. Building on the alchemical notion that she calls the unio corporalis (‘union with the body’), first identified by early alchemists, she takes us on a journey to the profound levels of subtle body reality in that landscape of the psychoid that Corbin calls the imaginal world.

Pressing up from a realm that is neither spirit nor matter, yet paradoxically psychophysical in nature, the daimons and guides from this realm are seeking connection and transformation with our co-participation, in order to enable both consciousness and matter to evolve to a higher level. Increasingly we hear about what I call signatures of this new emerging subtle realm coming back into prominence in our time – from synchronicities, kundalini openings, shamanic and near-death experiences, to UFO encounters and the mysteries of crop circle manifestations – as spirit and matter reach toward each other for a new Sacred Marriage in the realm of psyche.

This book helps us learn to recognize and navigate this subtle, imaginal realm and its denizens, and to heal through its often taboo energies, associated with the presence of feminine wisdom as Sophia, and engages us at the leading radical edge of Jungian psychology today.

—By VERONICA GOODCHILD, PhD, Core Faculty, Jungian and Imaginal Psychology, Pacifica Graduate Institute, author of Eros and Chaos: The Sacred Mysteries and Dark Shadows of Love (2001, 2008), and Songlines of the Soul: Pathways to a New Vision for a New Century (2012).
http://veronicagoodchild.com/wordpress/book-review-embrace-of-the-daimon-by-sandra-dennis/

In “Embrace of the Daimon” Sandra Lee Dennis joins scholarship with personal storytelling to examine the integration of Soul with the body/mind. As an account of her own experience, there is much here to inform anyone who might venture onto a similar path. And as an astute study of the winding road of psychic transformation, the author fully explores topics readers would expect in a discussion of depth psychology: alchemy, the imaginal realm, the soul, the subtle body, and more. Unlike many such books, this one addresses itself to the layman as well as the professional, so that anyone with some background in archetypal psychology should be able to follow along.

Dennis builds upon Carl Jung’s prior work on the individuation process, that is, the process by which a person becomes fully herself, liberated from the conventional mindset built up by social constraint, ingrained habits, and personal fears. For Jung, the first step in this work was the union of the conscious mind with the unconscious parts of the personality, both dark and light. And although he described two further steps, he did not develop them. Dennis’ book breaks new ground in that it describes the second step, which involves the union of the individuated spirit/soul with the body.

This step is not for the faint of heart, as Dennis’ personal story makes clear. This union is more like a rape than a happy wedding. There are two reasons for this. First, the structure of one’s felt sense of body/mind must be dismantled so that a new structure can be built; to imagine this, think of inhabiting a house while it is being demolished and rebuilt. Second, this is also about “making room for the reemergence of nature’s engulfing darkness as an active player in the psyche.” Nature’s darkness and the forces of instinct are, in our culture, seen as demonic rather than as sources of creative energy. Thus we are trained to fear and resist them. As new and unsettling content works its way into every nook and cranny of our being, physical symptoms and disruptive imagery are liable to manifest, sometimes with great force.

Why should anyone want to go through this? Most people don’t, I believe. And I would guess that most who do go through it are carried along by some larger current that they can’t name. However, through this work a new consciousness emerges–one that can hold the tension of the opposites, one that can yoke spirit and matter, one that is ready for the third step described by Jung, which is the union of the new consciousness with the outer world, i.e., “enlightenment.”

As described by Dennis, the journey through the second phase closely resembles the crisis stage in shamanic initiation, which is also often accompanied by physical symptoms, visions, and temporary madness. In both cases, the journey resolves (hopefully) with the birth of a consciousness able to span many levels, from primal instinct to spirit. Thus Dennis’ writing and experience is grounded in ancient tradition as well as in modern depth psychology. Her special gift is to provide a contemporary map of transformation in which the body is as important as the mind, a notion that has long been neglected in the modern West. Her book is a major contribution to ending Western mind-body dualism, as well as to furthering our understanding of how we grow.