I frequently mention that our culture does not recognize abandonment and betrayal as traumatic shocks. The shock occurs partly because being deserted or cheated on usually comes as a final blow in a mind-numbing, repetitive cycle of emotional abuse.

Elusive abuses of power wear a person down over time until you come to accept them as normal. Only when you are on the receiving end of the final blow does the manipulation, undermining and devaluation you have been living with sink in.

Once you receive the shocking news, you quickly realize what your confusion and pain have already been telling you—emotional, also known as mental or psychological, abuse is often more harmful than physical abuse. At least with physical abuse, you know what hit you.

Emotional abuse comes in many flavors.  It is actually a form of brain-washing that can rapidly undermine your quality of life. Overt forms of abuse, such as yelling, criticizing, bullying, etc. are also easy enough to recognize. But covert psychological abuse is difficult to detect and substantiate. It eats away at your self-esteem and can cause you to question your sanity before you know it.

Being in relationship with a “nice guy” covert abuser can destroy your trust in yourself, your self-worth and confidence, and finally even your sense-of-self. Without you even realizing what is happening.This is why the more you know about the subtle, hidden forms, the better equipped you will be to recognize what is happening to you. You will need this knowledge to extricate yourself, and to do what it takes to heal if the damage has already been done.

The Many Forms of Hidden Emotional Abuse

Are you or have you been, for instance, in a relationship with anyone who criticizes and blames you for their feelings and moods? Abuse often initially slips into a relationship  through blame. “I may have yelled, but you attacked me first.” “If you treated me better (or took better care of yourself), I might feel like having sex with you.” Do they routinely transfer or project their feelings of fear, shame, worthlessness or anger onto you? When blame, criticism and projections are repeated often enough by someone you trust and love, you begin to question your own perception of reality.

Are you with someone who walks out on you repeatedly or threatens abandonment because of something you do or say?—as if you are on probation with them? Do they accuse you of things you know are not true? Do they revise history, casting you in a negative light? Make promises they routinely forget or don’t otherwise keep? Randomly disengage from you, withdrawing affection and attention, with no explanation?

Meanwhile, do they give large quantities of attention to other people, activities, work, or hobbies for extended periods of time, as if you are an afterthought? Give you the silent treatment, or stonewall you (refuse to listen)? Do they disregard or “forget” commitments or promises, while asking “Why you are upset? What is your problem?”—assuring you nothing is wrong?

Do they run hot and cold, regularly interspersing these hurtful, destabilizing behaviors with attention, warmth and “love-bombing—such as bringing you flowers, cards, and gifts, offering apologies and professions of your specialness and their love for you?  Do they routinely seduce and abandon you in little, everyday ways; give love and take it away—over and over again?

If so, they may be forging a trauma or betrayal bond with you that is difficult to break. Whether they know it or not, they are playing on your trust and vulnerabilities to increase your attachment to them and their power over you. Likely, they are not even consciously aware of what they are doing. Abusers routinely deny and justify their hurtful behavior. For many, emotional abuse has become second nature—an ingrained way to manage their own pain, shame and fear, by passing these feelings on to you.

“Love and the Mystery of Betrayal”—now available in print and ebook. 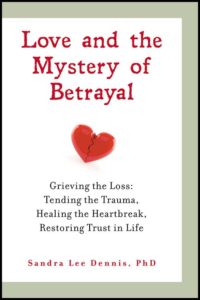 Buy Love and the Mystery of Betrayal on Amazon